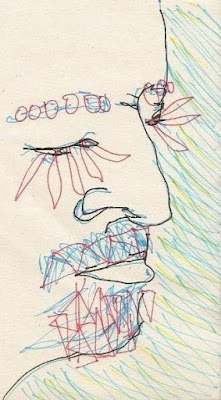 The words hit me while I was laying on the delivery table at UCSF's Birth Center. Words that had been inert, dowdy even. Words like latch and skin and ache. It was 4 or 5am, I was halfway through labor, and I was having—I'm not sure how else to describe it—a literary experience.

Though I'd recently consumed a lot of fentanyl and laughing gas, at that point the only thing in my system was the epidural. So this experience was not the effect of any drug. But there was something drug-like about it: I was suddenly conscious of a hidden beauty in common words. The words were hugging me, singing themselves to me. It was as if my baby-love hormones were misfiring at language.

Do you know, I wanted to ask the busy nurses, that your entire body is covered in skin? But do you really know this? And do you know, I wanted to ask my sleeping husband, that air is available all around us, as invisible and essential as vowels, and that one need only to open her nostrils to take in unlimited quantities of the fresh scent of life? Everyone went about their business while I was possessed by these stunning, obvious realizations.

When my son finally arrived I did not find him beautiful. He was skinny in that awful way that newborns are, not even really cute yet. But the words that circulated in my mind around his arrival, those were beautiful. Skin to skin, the nurses murmured. Skin to skin to skin, I thought, because there was also the word skin, a third surface there between us.

All through pregnancy and then all through postpartum I was plagued by a nothingness. I was a gestating blob and then a lactating blob. Everything unfolded as it did, and I had nothing to say about any of it. But for a brief sliver in between, the blob-sense lifted. A constellation of words became events in themselves, unhinged from reality and simply floating. Like a mobile.

There was skin, a ligamentous K sheathed in the slick sound of S. The word made me suddenly aware of my skin, the sheer volume of it, every inch susceptible to touch. The tops of my feet, earlobes, scalp, all pulsated in response to the sound of their common name. And when a little mouth came for that most sensitive part of my body, the word latch offered itself up for reverie. I could feel the relief embedded in the word: the searching la? and the tight enclosure tch.

I'd be sitting on the couch just existing in a vague anxious stew of homelife, feeling my breasts engorge. And then a word would occur to me, and its occurrence became an occasion. The ache in my breast wasn't just the ache in my breast, it was the word ache, a throbbing heart of a word that wanted to burst as milk and sputter like mean bright static into the baby's feverish sucking, and suck, like a cup to my ear strung back in time to adolescent kissing, like a ball landing in a mitt with a satisfying smack, its mad flight arrested in an instant, and all the while my little suckling continued his sucking, oblivious to this pulsing fusion and separation of words and the things they described.

Tit, clot, breath, the words made me blush, they touched my whole skin. It was like the moment they laid the babe on my chest and I could see there was another person in the room, a budding will in a sack of fresh skin. The encounter gave certain words a crispness, a just-bornness. A body of their own. A body I could hold in my mind the way you hold a baby in your arms, not expecting anything of it, not making anything of it, just making acquaintance.

Posted by Lindsay Meisel at 7:15 AM